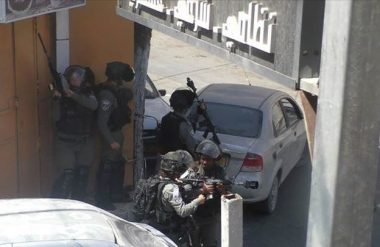 Israeli soldiers injured, Saturday, dozens of Palestinians during processions in Beit Ummar town, north of Hebron, in the southern part of the occupied West Bank.

Hundreds of Palestinian protesters marched in the center of Beit Ummar, in addition to the junctions of at-Tarbeeqa and al-Ein, before the soldiers invaded the town, and forced store owners to close, in addition to stopping and searching dozens of cars.

The soldiers fired rubber-coated steel bullets, gas bombs and concussion grenades at the protesters, causing dozens to suffer the effects of teargas inhalation.

In addition, a young man suffered a fracture in one of his arms after falling while several soldiers were chasing him; he received the needed treatment by Red Crescent Medics, who rushed him to a local hospital.

The soldiers also confiscated two Palestinian cars from the town and fired gas bombs and concussion grenades into a farmland, owned by a local farmer, causing fire and destroying his crops.