In New Crime of Excessive Use of Lethal Force against Peaceful Demonstrators in Gaza Strip, Israeli Forces Kill 2 Palestinian Civilians; One of Them is Child, and Wounded 124 Others, including 13 Children, 3 Women, 3 Paramedics, and Female Journalist 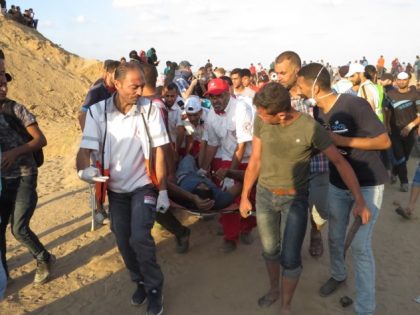 The Palestinian Centre For Human Rights (PCHR): On Friday, 29 June 2018, using excessive lethal force against the peaceful protesters in eastern Gaza Strip for the 11th Friday in a row, Israeli forces killed 2 Palestinian civilians, including a child, and wounded 124 other civilians, including 13 children, 3 women, 3 paramedics and a female journalist, in addition to dozens suffering tear gas inhalation.  Upon a Decision by the highest political and military echelons, the Israeli forces continued to use excessive force against the peaceful protesters, who posed no threat to the life of the soldiers.

Investigations and observations by PCHR’s fieldworkers during this week emphasize the following: 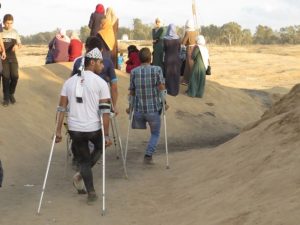 At approximately 15:00, hundreds of civilians, including women, children and entire families, started swarming to 5 encampments established by the Supreme National Authority for the Great March of Return and Breaking Siege in eastern Rafah City; Khuza’ah in Khan Younis; al-Bureij in the Central Gaza Strip; Shija’eyah neighborhood in Gaza City; and eastern Jabalia in the northern Gaza Strip.

The number of participants gradually increased, reaching a peak at approximately 16:30, in the five demonstration areas, and they were estimated at thousands of men, elderlies, women and children.

They were inside and outside the encampment yards, raising flags, and chanting slogans and national songs in addition to flying kites, while hundreds of them, including children and women, approached the border fence, set fire to tires and attempted to throw stones at the Israeli forces.

Moreover, the protestors removed the barbed wire fence established by the Israeli forces inside the Palestinian territories around 50 meters away from the main border fence.

The Israeli shooting which continued until 19:30 resulted in the killing of 2 civilians, including a child, in eastern Rafah and Khan Younis, south of the Gaza Strip when they were among other protestors around 100-200 meters away from the border fence.

Those civilians killed were identified as:

PCHR condemns this new crime committed by the Israeli forces, believing it is as a result of Israel’s enjoying impunity thanks to the U.S. and so encouraging the Israeli forces to commit further crimes upon an official decision by the highest military and political echelons. 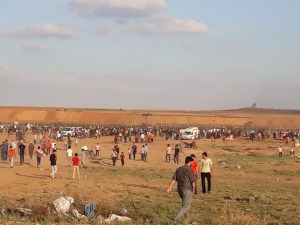 PCHR emphasizes that ongoing attacks against the Palestinian medical personnel, especially those working in the field, constitute a serious violation of the international human rights and humanitarian laws and the international standards regulating the protection rules of medical personnel, including paramedics, their vehicles and medical facilities.  The serious violations and deliberate attacks against the medical personnel amount to war crimes according to the 1949 fourth Geneva Convention, particularly the scope of protection provided to them.

PCHR believes that continuously targeting journalists while on duty with bullets and tear gas canisters proves that there is an Israeli policy to target journalists in order to prevent them from covering the Israeli suppression of the peaceful protestors, in violation of the rule of international humanitarian law.

PCHR emphasizes that the demonstrations are fully peaceful and civilians have the right to raise their voices against the Israeli forces and closure and enjoy their right to return.  Thus, PCHR stresses that Israel shall be held accountable and prosecuted through investigating with it into these crimes.

PCHR asks for the presence of international observers from the United Nations (UN) bodies in the Gaza Strip to make sure that these demonstrations are totally peaceful and even if the Israeli authorities denied their access to Gaza, they can observe from the Israeli side of the borders.

PCHR calls for the prompt formation of an international commission of inquiry according to the UN Human Rights Council’s Resolution to investigate the crimes committed by the Israeli forces against unarmed civilians in the Return March activities.