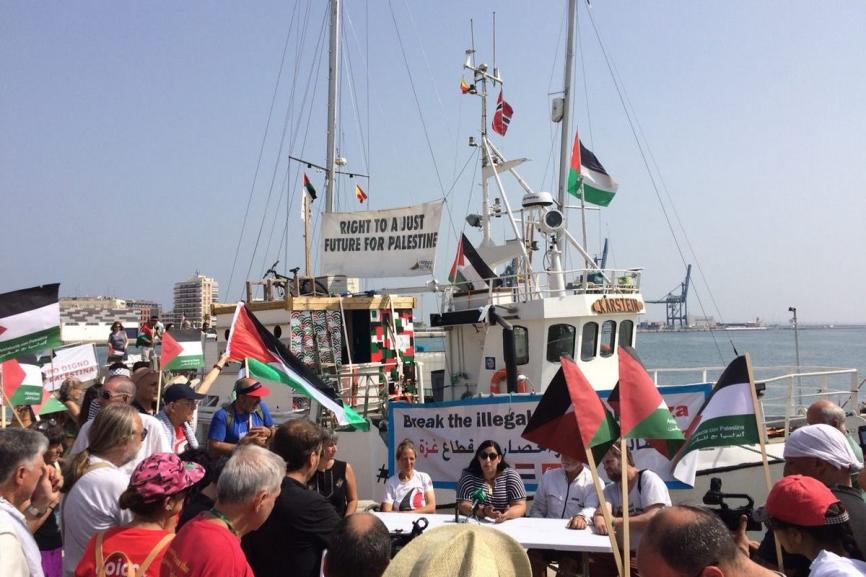 Two of the boats participating in the 2018 ‘Freedom Flotilla’ to break the Israeli blockade on Gaza left Spain Friday on their way to Italy, then onward to the Gaza Strip.

The two vessels are called Freedom and Al-Awda (Arabic for ‘The Return’, in reference to the Palestinian refugees’ internationally-recognized right of return to their homes in what is now Israel).

The boats left the port of Qadish, in Spain, headed to Cagliari port on the island of Sardinia, Italy, then to Gaza to break the 11-year blockade by the Israeli occupation on the Gaza Strip.

When the boats left Qadish, they were seen off by a crowd of supporters who cheered, chanted and waved Palestinian flags and called for an end to Israel’s siege on Gaza.

They will join up with two other boats in Italy, all filled with humanitarian aid and support for the Palestinian people in Gaza.

The Flotilla had tried to stop in the port of Paris, but following a pressure campaign by Zionist groups in France, the city of Paris refused to allow them to land.

Zaher Birawi, head of the International Committee for Breaking Gaza Siege and founder member of Freedom Flotilla Coalition, hailed the solidarity efforts exerted in all cities and ports they have already visited. He expressed hope that these efforts will succeed in pressuring politicians in Europe to end Gaza siege.

The Gaza Strip has enduring an 11-year Israeli siege which has limited electricity supplies and the delivery of vital medicines, leaving residents struggling to survive. The UN has warned that Gaza could become “uninhabitable” by 2020.