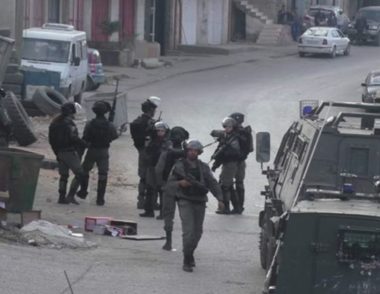 Israeli soldiers invaded, on Monday evening, Beit Ummar town, north of Hebron, in the southern part of the West Bank, attacked many residents and stores, before firing gas bombs at Palestinians who protested the invasion, causing dozens to suffer the effects of teargas inhalation.

The invasion targeted several areas in Beit Ummar, but was mainly focused in ‘Aseeda and Ras al-‘Ein.

Mohammad Ayyad Awad, a nonviolent activist from the town, said the soldiers invaded Beit Ummar and started shutting stores down, in addition to stopping and searching dozens of Palestinians while inspecting their ID cards.

He added that the soldiers closed the main road in Beit Ummar, and prevented the Palestinians from entering it.

The soldiers also distributed leaflets, warning more severe measures in the town, “should the Palestinian youngsters continue to throw stones at the military and settlers’ vehicles.”

Dozens of Palestinians protested the invasion and hurled stones at the military jeeps, while the soldiers fired gas bombs, concussion grenades and rubber-coated steel bullets.