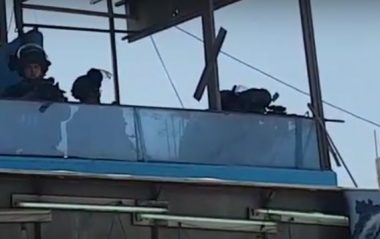 Israeli soldiers shot and injured, Monday, eighteen Palestinians, including eight with live rounds, including one who suffered a severe injury, and caused dozens of residents to suffer the effects of teargas inhalation, near Qalandia terminal, north of occupied East Jerusalem.

Medical sources said eight Palestinians were shot with live fire, including one who suffered a severe injury, after a soldier shot him in the abdomen.

The young man was transferred to the Palestine Medical Complex in Ramallah due to the seriousness of his injury.

Ten other Palestinians were shot with rubber-coated steel bullets, and dozens suffered the effects of teargas inhalation, and were all treated at a make-shift clinic, installed by the Red Crescent near Qalandia. 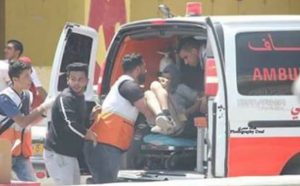 The incident happened after the soldiers fired many live rounds, rubber-coated steel bullets and gas bombs at dozens of Palestinians, marching in solidarity with the hunger striking detainees.

The soldiers also invaded many residential and commercial buildings overlooking the main road where the Palestinians marched and used their rooftops as firing posts and monitoring towers.