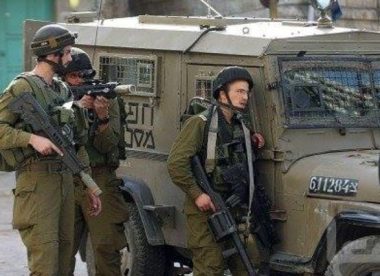 Mohammad Ayyad Awad, a media activist with the Popular Committee in Beit Ummar, said the soldiers abducted the five young men while they were trying to extinguish a fire in Palestinian lands, close to Gush Etzion colony and military base.

Awad stated that the soldiers chased the five young men, and abducted them; three of them have been identified as Ghazi Mohammad ‘Aadi, 35, Omar Mohammad Ekhlayyel, 28, and Jamal Nayef ‘Aadi. 25, from Beit Ummar, and two, who remained unidentified until the time of this report, are from Surif town.

They were cuffed and blindfolded, before the soldiers moved them to Etzion military base and security center.

Furthermore, the soldiers abducted one Palestinians, identified as Hussein Falah Natsha, 25, during clashes that took place in Bas az-Zawiya area, in the center of Hebron city.