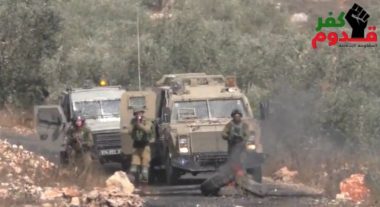 Israeli soldiers attacked, Friday, the weekly procession against the Annexation Wall and Colonies, in Kufur Qaddoum town, east of Qalqilia, in the northern part of the occupied West Bank, and injured eleven Palestinians, including a child.

Morad Eshteiwy, the media coordinator of the Popular Committee against the Wall and Colonies in Kufur Qaddoum, said the soldiers used excessive force against the protesters, and fired many live rounds, gas bombs, concussion grenades and rubber-coated steel bullets.

Eshteiwy added that many at least eleven Palestinians, including a child, identified as Khalifa Riyad Eshteiwy, 11, were injured and received the needed treatment, following clashes that took place after dozens of soldiers invaded the town, and assaulted the weekly procession.

It is worth mentioning that the soldiers installed, during early morning hours, a military roadblock at the main entrance of the town, searched dozens of cars, examined the ID cards of scores of Palestinians, in addition to photographing license plates and ID cards.