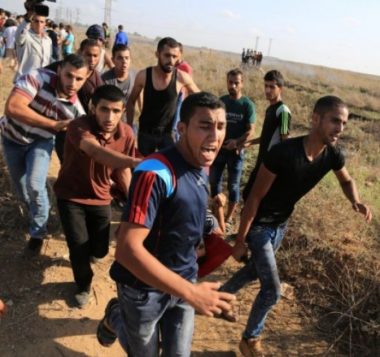 Israeli soldiers shot, on Friday evening, fifteen Palestinians with live rounds, including two suffered life-threatening wounds, after the army attacked protesters on Palestinian lands close the border fence, in the northern and eastern parts of the Gaza Strip.

The soldiers, stationed on military towers and in tanks near and around Nahal OZ army base, east of Gaza city, fired dozens of live rounds at the protesters, wounding five young men in their legs, and causing two others to suffer the severe effects of teargas inhalation.

The wounded Palestinians were moved to the Shifa Medical Center, west of Gaza, suffering moderate-but-stable wounds, while the rest received treatment from the effects of teargas inhalation at the scene.

In addition, the soldiers fired many live rounds and gas bombs at Palestinian protesters near the border fence, east of Jabalia and north of Beit Lahia, in the northern part of the Gaza Strip, wounding eight Palestinians.

One of the wounded Palestinians suffered a serious injury after the soldiers shot him in his eye, and another suffered a moderate wound from a gunshot injury to his abdomen, while dozens suffered the effects of teargas inhalation, before medics rushed them to the Indonesian Hospital, in Beit Lahia.

The soldiers also shot two other Palestinians with live fire, including one who suffered a serious injury in the pelvis area, while the other was shot the leg, before they were rushed to Nasser Hospital and the European Hospital.

Medics also provided many Palestinians with the needed treatment for the effects of teargas inhalation.

Furthermore, the soldiers also attacked protesters east of the al-Boreij refugee camp, in in central Gaza, and east of Beit Hanoun, in the northern part of the coastal region.

It is worth mentioning that, late on Friday at night, the Israeli Air Force fired two missiles into an area in Rafah, in the southern part of the Gaza Strip, causing property damage.

The Army claimed it “fired missiles at two targets of the al-Qassam Brigades, the armed wing of Hamas, in retaliation to shells that was fired from Gaza, and landed in open areas.”