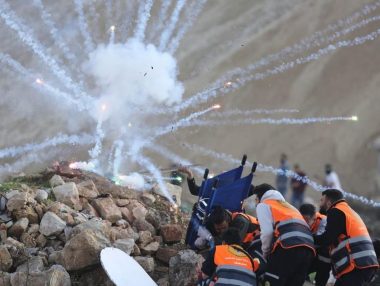 Israeli soldiers shot, Friday, eleven Palestinians with live rounds, and rubber-coated steel bullets, at the northern entrance of al-Biereh city, in the Ramallah and al-Biereh governorate, in central West Bank.

The soldiers attacked dozens of Palestinians who were marching against the ongoing Israeli occupation and its colonialist policies, in addition to the illegal U.S. recognition of occupied Jerusalem as the unified capital of Israel, in direct violation of International Law and all related United Nations and Security Council resolutions.

The soldiers also fired many gas bombs and concussion grenades, causing many to suffer the effects of teargas inhalation.

Many local youths burnt tires, and hurled stones at the invading army jeeps.

Furthermore, the soldiers assaulted many journalists, and forced them out of the area, to prevent them from documenting the unfolding events.

Wassel Abu Yousef, the secretary-general of the Palestine Liberation Front, said the Israeli violence, and the excessive use of force, will not deter the Palestinians, adding that the protests will continue despite the American stances and illegal policies.

“There can be no peace without Jerusalem, without liberation, self-determination and the Right of Return of all refugees,” he said, “The U.S. cannot take Jerusalem off the negotiations’ table, in direct violation of International Law and the Fourth Geneva Convention.”

Essam Bakr, the coordinator of the National and Islamic Factions in Palestine, said this protest is part of ongoing processions and activities, in various parts of occupied Palestine, including its occupied capital, Jerusalem.

“Our message, the message of the people and the leadership, is unified,” he said, “There can be no peace without Jerusalem as the capital of Palestine.”

It is worth mentioning that the soldiers also attacked dozens of protesters along the eastern and northern borders of the Gaza Strip, causing many to suffer the effects of teargas inhalation.

Hundreds of Palestinians matched in various parts of the coastal region, including Jabalia, in northern Gaza, al-Boreij in the Central District, and Khan Younis, in southern Gaza, while the soldiers fired dozens of live rounds, rubber-coated steel bullets, gas bombs and concussion grenades.

In addition, the soldiers attacked the weekly nonviolent procession against the illegal Annexation Wall and colonies, in Ni’lin village, west of Ramallah, causing many protesters to suffer the effects of teargas inhalation.