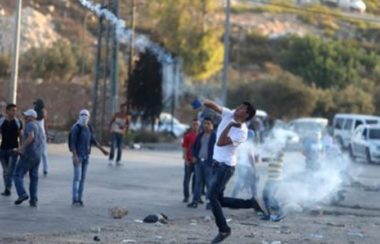 Israeli soldiers injured, Friday, five Palestinians, and caused several others to suffer the effects of teargas inhalation, after the army invaded al-Biereh city, in central West Bank, and attacked many protesters.

Media sources said the soldiers invaded Jabal at-Taweel area, east of al-Biereh, and shot a young man with live fire in his leg.

They added that the soldiers also assaulted a child, while standing in front of his home, causing many cuts and bruises.

The soldiers also fired a barrage of gas bombs and concussion grenades at the Palestinians in the al-Baloa’ area, and shot three young men with rubber-coated steel bullets.

Many Palestinians suffered the effects of teargas inhalation, and received the needed treatment.

Furthermore, the soldiers chased and attempted to abduct several young Palestinian men in the city.