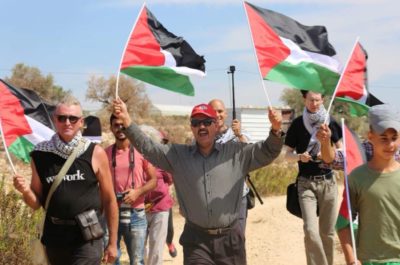 Israeli soldiers resorted, Friday, to the excessive use of force against the weekly nonviolent procession against the Annexation Wall and Colonies in Bil’in village, west of the central West Bank city of Ramallah, wounding many protesters, and burning olive trees.

The Popular Committee against the Wall and Colonies in Bil’in said many Palestinians, accompanied by Israeli and international peace activists, marched from the center of the village, heading towards the olive orchards in Abu Lemon area, near the illegal wall, before the soldiers fired a barrage of gas bombs and concussion grenades at them.

Many protesters suffered the effects of teargas inhalation, and received the needed treatment.

The Israeli gas bombs and concussion grenades also caused fires in Palestinian orchards in the area, burning many olive trees.

The soldiers, stationed on military towers on the Annexation Wall, photographed the protesters, and prevented many Palestinians and international peace activists from entering the orchards to pick the olive trees, isolated behind the Wall. Dr. Rateb Abu Rahma, the coordinator of the Popular Committee in Bil’in, said the protesters marched carrying Palestinian flags, and chanting for national unity, the release of all detainees and the Right of Return of the refugees.

He also called on constant solidarity with the al-Khan al-Ahmar Bedouin community, facing demolition and displacement by Israel for the illegal construction and expansion of colonies.