Army Injures Four In Hebron, Causes Many To Suffer Effects Of Teargas Inhalation 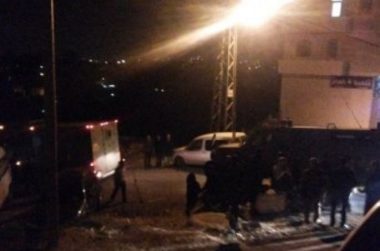 Mohammad Awad, a local media activist in Beit Ummar, said the soldiers invaded many areas in the town, especially Mothallath al-Ein area, and attacked many Palestinian youngsters, who protested the invasion.

Awad added that the soldiers shot three young men with rubber-coated steel bullets; one in his neck, and two in their legs and arms, in addition to causing many others to suffer the effects of teargas inhalation.

He also stated that the soldiers fired rubber-coated steel bullets at a car of a local medic, who rushed to render aid to wounded Palestinians, before a bullet smashed his car’s front shield, causing him to suffer various cuts and bruises, especially to his face.

It is worth mentioning that the soldiers posted warning messages on the various walls of the town, threatening ‘severe and extensive punishment” against the locals “if they do not end their protests.”