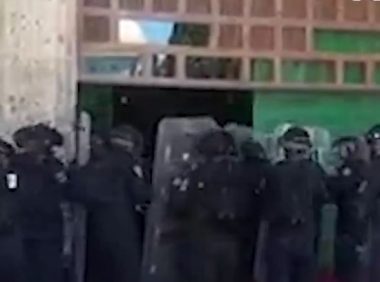 Israeli soldiers released, on Saturday at night, 19 Palestinians from occupied East Jerusalem, after issuing orders barring them from entering the Al-Aqsa Mosque in the city, for one week, and kept five others under interrogation.

The Palestinian Prisoners’ Society (PPS) said the 19 released Palestinians were each ordered to pay 5000 Israeli shekels fine, and received warrants barring them from entering the holy site for one week.

It added that the police and army are refusing to release five detained children, who are still held under interrogation in the al-Maskobiyya detention and interrogation facility, in Jerusalem.

The five have been identified as Bassam Shokri Qonbar, 17, Assem Yazid Halayla, 15, from Jabal al-Mokabber town, south of Jerusalem, Mo’men Maher al-Karaki, 16, from the at-Tour neighborhood, in addition to Omran Mustafa Mala’ba, from Anata town, northeast of Jerusalem, and Mohammad Emad Ma’touq, 16, from Shu’fat, north of the city.

They were all abducted by the army and the police, on Friday, after dozens of soldiers invaded the courtyards of the Al-Aqsa Mosque, and assaulted the Palestinian worshipers, wounding forty of them, in addition to abducting at least twenty others.

Medical sources said at least 40 Palestinians suffered various cuts and bruises, in addition to the severe effects of teargas inhalation, the soldiers, accompanied by groups of extremist colonialist settlers, stormed the courtyards of the holy site, and started their assault by attacking its guards.