Husband And Wife Injured After Israeli Colonizers Attacked Them In Hebron 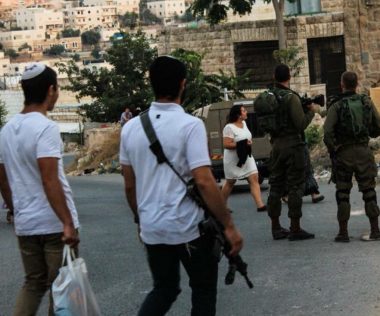 A number of extremist illegal Israeli colonizers attacked, on Saturday at night several Palestinians, and injured a husband and his wife in Tal Romeida neighborhood, in Hebron city, in the southern part of the occupied West Bank.

Eyewitnesses said the Israeli assailants came from Ramat Yishai and Beit Hadassah illegal colonialist outposts, and assaulted many Palestinians, in addition to using pepper-spray against them.

They added that a Palestinian man, identified as Samer Ghanem, and his wife, were injured before they were rushed to a local hospital.

Many children also suffered anxiety attacks after the colonizers assaulted them, and their families.