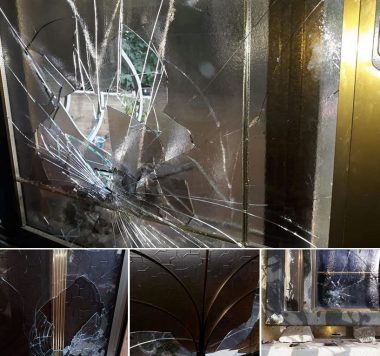 Israeli soldiers injured, Saturday, eight Palestinians, including a journalist, in Kufur Qaddoum village, east of the northern West Bank city of Qalqilia, after the army resorted to the excessive use of force against the nonviolent protesters, marching against the illegal Annexation Wall and Colonies.

Morad Eshteiwi, the media coordinator of the Popular Committee against the Annexation Wall and Colonies in Kufur Qaddoum, said the soldiers resorted to the excessive use of force against the protesters, and fired live rounds, rubber-coated steel bullets and gas bombs at them.

He added that the soldiers shot Palestine TV cameraman Luay Samhan, and four other Palestinians with rubber-coated steel bullets.

Another Palestinian, identified as Abdullah Ali, suffered fractures in both arms after falling down while the soldiers were chasing him.

The soldiers also invaded his home and smashed many of its windows, in addition to breaking windows in his car, before invading the home of Mohammad Tahboush, broke  its windows too, and used the rooftops of the two properties as firing posts against the protesters.

On its part, the Palestinian Information Ministry denounced the Israeli attack against the nonviolent properties, especially the attack against cameraman Luay Samhan, who was shot in his leg, and said that the assault of part of Israel’s policies against the media in Palestine, as they expose its ongoing crimes and violations.

In a press release, the Ministry said Israel’s ongoing aggression against the journalists, and media agencies, is an outcome of the inability of the Security Council to implement its own resolution #2222 regarding the protection of journalists, and punishing the parties that attack them.

It called on the International Federation of Journalists (IFJ), and Reporters Without Borders, to act on ensuring the Palestinian journalists and media outlets are protected from “this Israeli terror that does not respect International Law, and constantly violates all treaties which protect the journalists.”