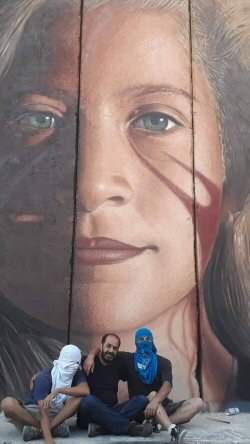 The activist said, according to WAFA, that Israeli soldiers detained the two Italian painters while they were adding the last finishing touches to the painting that depicts Ahmed al-Tamimi. Forces also seized the painters’ equipment and supplies, and detained Palestinian activist, Mustafa al-Araj.

The painters reportedly came from Italy specifically to draw the painting ahead of Tamimi’s expected release from prison, tomorrow.

Ahed Tamimi was detained for confronting Israeli soldiers who had forced their way into her family’s yard, in Nabi Saleh village, to the north of Ramallah, occupied West Bank, soon after soldiers shot and critically injured her 15-year-old cousin, who was hit in the face. Her trial is still ongoing.

Tamimi’s story has garnered global attention, and both Amnesty International and Human Rights Watch have called for her release.

To be noted, some 85% of the wall’s route runs inside the West Bank, rather than along the Green Line; if completed as planned, the barrier will isolate 9.4% of the West Bank, including East Jerusalem, said the United Nations OCHA.