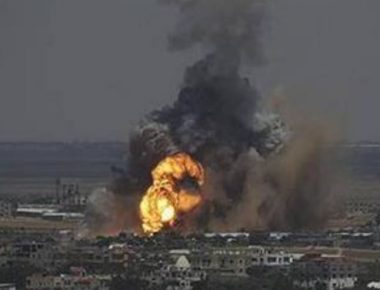 Medical sources in the Gaza Strip have reported that four Palestinians have been injured, earlier on Monday, in a series of Israeli air strikes targeting several areas, in different parts of the Gaza Strip.

The sources added that most of the strikes targeted areas east of Rafah, in the southern part of the Gaza Strip, while other missiles struck Palestinian agricultural farmlands, north of the city.

All wounded were moved to Abu Yousef Najjar Hospital, in Rafah, suffering moderate wounds, while others were treated for minor injuries.

Israeli F-16 war jets also fired a missile into a site, north of Beit Lahia, in the northern part of the Gaza Strip, causing excessive damage to several homes and structures.

On its part, the Israeli army said its air force attacked five targets, run by the al-Qassam, Brigades, the armed wing of Hamas, allegedly after a shell “was fired from Gaza, and exploded in an open area in Sha’ar HaNegev Regional Council.”

It is worth mentioning that the Israeli army and air force have attacked at least fifteen targets, in different parts of the coastal region, since Monday afternoon.