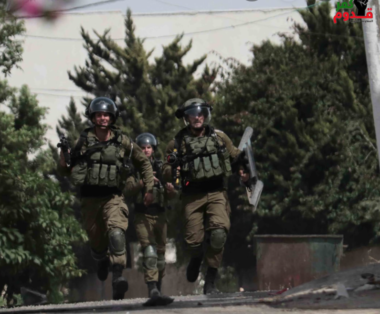 Israeli soldiers attacked, Friday, the weekly procession against the Annexation Wall and Colonies, in Kufur Qaddoum, east of the northern West Bank city of Qalqilia, and shot three with rubber-coated steel bullets, in addition to causing many to suffer the effects of teargas inhalation.

The Popular Committee against the Wall and Colonies in Kufur Qaddoum said the Palestinians marched from the center of the village, chanting against the ongoing Israeli occupation and its escalating violations.

It added that the soldiers fired many live rounds, rubber-coated steel bullets, gas bombs, and concussion grenades at the protesters.

Three Palestinians were shot with rubber-coated steel bullets, and many suffered the effects of tear gas inhalation.

Many Palestinian youngsters hurled stones at the invading soldiers after they attacked the procession.
It is worth mentioning that, during their invasion into Kufur Qaddoum, the soldiers burnt tires to conceal their movements.

Kufur Qaddoum has been holding weekly processions since 2003, since the army closed and blockaded the town’s main road, to allow easy access to the colonialist settlers who drive to and from their illegal “Kedumim” colony, which was built on stolen Palestinian lands.