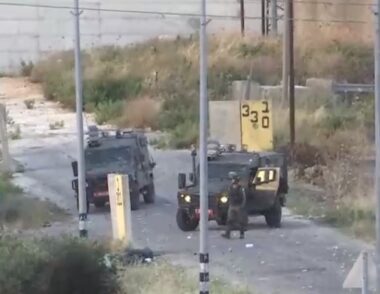 Israeli soldiers attacked, Friday, dozens of Palestinian protesters in the northern West Bank governorate of Nablus, wounding more than 120 Palestinians, including five who were shot with live fire, and twenty-two with the rubber-coated steel bullets.

Media sources said the soldiers attacked nonviolent protesters, marching in condemnation of the Israeli escalation, south, and east of Nablus, and fired a barrage of live fire, rubber-coated steel bullets, gas bombs, and concussion grenades at them.

The Palestinian Red Crescent Society (PRCS) has reported that its medics provided treatment to 120 Palestinians, including five who were shot with live ammunition, and 22 with rubber-coated steel bullets.

It added that at least 92 Palestinians suffered the effects of tear gas inhalation, and one was injured when he fell as the soldiers were chasing him.

The protests took place in several areas of the Nablus governorate, especially near the Huwwara military roadblock, south of the city, and Beit Forik roadblock, east of Nablus.

In related news, the soldiers caused many Palestinians to suffer the effects of tear gas inhalation in a procession in the eastern area of Beit Dajan village, east of Nablus, during the weekly procession against the Annexation Wall and the confiscation of Palestinian lands.