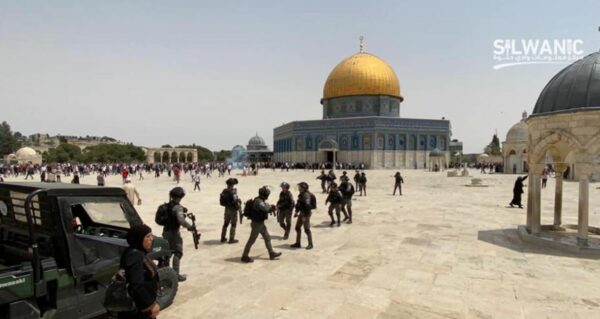 Israeli soldiers invaded, Friday, the courtyards of the Al-Aqsa Mosque, in the occupied Palestinian capital, Jerusalem, in the West Bank, and attacked worshipers, wounding at least twenty Palestinians, mainly with the rubber-coated steel bullets, in addition to abducting several Palestinians.

The soldiers invaded Al-Aqsa just after noon prayers, before storming the al-Qibli mosque in the holy compound, forcing the worshipers out, and occupying its rooftop.

Medical sources said the soldiers shot twenty Palestinians with the rubber-coated steel bullets and caused many to suffer the effects of tear gas inhalation, in addition to abducting several Palestinians.

The soldiers also fired gas bombs and concussion grenades at Palestinian worshipers near the Dome of the Rock in the Al-Aqsa compound, and near Bab al-Asbat and Bab al-Silsila gates, while removing the Palestinians from the holy site.

Furthermore, the soldiers closed the gates of the Al-Aqsa Mosque and assaulted several young Palestinian men before abducting them, in addition to preventing medics from entering the holy compound to provide treatment for the wounded.

Sheikh Omar al-Kiswani, the director of the Al-Aqsa Mosque, said the soldiers also detained more than 40 Palestinians, and assaulted them, near Bab al-Asbat and Bab al-Majlis.

In the Old City, the soldiers abducted a former political prisoner, identified as Nihad Zghayyar, 42, in addition to Mohammad Froukh from the Ein al-Louza neighborhood in Silwan, south of Al-Aqsa, before moving them to an interrogation facility.