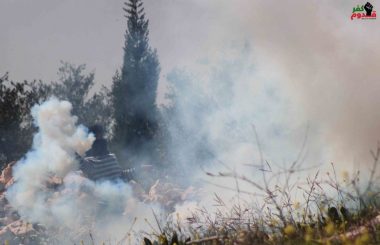 The Popular Committee against the Annexation Wall and Colonies in Kufur Qaddoum said the soldiers, in large numbers, assaulted the protesters and fired many rubber-coated steel bullets, gas bombs and concussion grenades at them.

It added that dozens of residents suffered the effects of teargas inhalation and received the needed treatment.

Undercover soldiers also attempted to ambush the Palestinians in olive orchards, but their hideout was exposed by the residents, and the soldiers then chased them into the town, while firing live rounds, and rubber-coated steel bullets.

In addition, the soldiers attacked dozens of Palestinians, who marched following Friday noon prayers, in Bab az-Zawiya area, in the center of the southern West Bank city of Hebron.

Medical sources said many Palestinains suffered the effects of teargas inhalation, and that the soldiers fired more gas bombs and concussion grenades, during confrontation that erupted in the area.