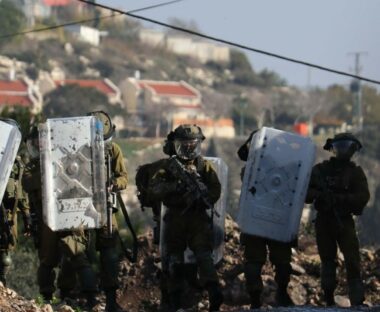 On Friday, Israeli soldiers injured many Palestinians, including three journalists, during the weekly procession in Kufur Qaddoum, east of Qalqilia, in the northern part of the occupied West Bank.

This week’s procession also marks the 58th anniversary of the establishment of the Fateh movement, headed by President Mahmoud Abbas.

He stated that the soldiers shot seven Palestinians, including three journalists, with rubber-coated steel bullets and caused dozens to suffer the effects of tear gas inhalation.

Last Friday, the soldiers attacked the weekly procession in Kufur Qaddoum and injured many Palestinians, including two journalists.

Earlier Friday, dozens of Israeli soldiers and undercover officers invaded the Old City of Nablus, surrounded a home before abducting a young man, and injured 35 Palestinians during ensuing protests, including at least two who were shot with live fire.