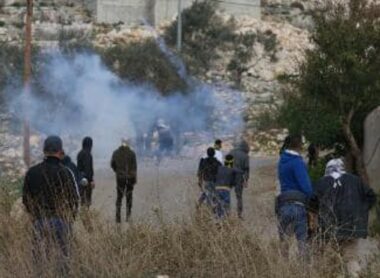 On Friday, Israeli soldiers attacked the weekly procession in Kufur Qaddoum, east of the northern West Bank city of Qalqilia, and injured many Palestinians, including two journalists.

He added that the soldiers shot four Palestinians with rubber-coated steel bullets and caused dozens of Palestinians, including two journalists, two suffer the effects of tear gas inhalation. The two journalists have been identified as Nidal Eshteyya and Abdul-Majid Adwan.

Eshteiwi stated that the soldiers hid in an abandoned home and tried to ambush and abduct several protesters who managed to escape.

The procession was attended by hundreds of Palestinians and came in condemnation of the death of Nasser Abu Hmeid, a Palestinian detainee who died from cancer after years of medical neglect by the Israeli prison authorities.

The protesters chanted for unity, ongoing resistance until liberation and independence, and the release of all detainees.