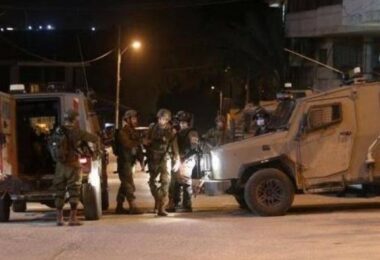 On Friday evening, Israeli soldiers installed roadblocks near the northern West Bank city of Jenin, in the northern part of the occupied West Bank, stopped and searched dozens of cars, and confiscated one.

Media sources said the soldiers installed a military roadblock at the junction between the villages of Rommana and Zabbouba, west of Jenin, and confiscated one car before moving it to the nearby Salem military base.

The soldiers also installed many roadblocks on the Jenin-Jaffa road and streets leading to the villages of Zabbouba, Ta’nak, Aneen, and Al-Arqa, stopped and searched dozens of cars, and interrogated the Palestinians while inspecting their ID cards.

The soldiers were also heavily deployed around many villages and towns west of Jenin and other parts of the governorate.