Army Injures Many Palestinians In Nablus 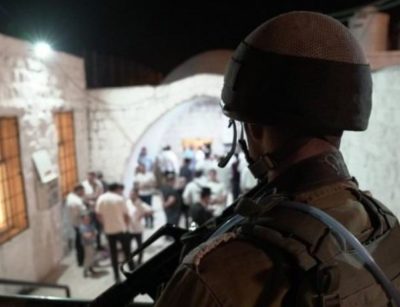 Media sources said the soldiers accompanied dozens of colonialist settlers into the site, after invading and surrounding the adjacent Palestinian communities.

They added that many Palestinian youngsters protested the invasion, and hurled stones at the army jeeps, while the soldiers fired gas bombs, concussion grenades, and rubber-coated steel bullets.

The invasion into the site, and surrounded areas, was carried out by dozens of soldiers, accompanying around 1200 colonists.

It is worth mentioning that Israel’s Education Minister, former Chief Military Rabbi, Rafi Peretz, and the head of the Regional Council on Settlements, Yossi Dagan, accompanied the colonists in this invasion.

The Israeli military allows Jews to visit as part of organized pilgrimages, despite the site being located in Area A where the Palestinian Authority has full control and prohibits Palestinians from worshiping at the site.

Ultra-orthodox and nationalist Jews regularly try to visit the shrine without approval, as many Jews believe the tomb to be the final resting place of the biblical figure in the Old Testament. Prophet Joseph is revered by Jews, Muslims, Christians, and Samaritans alike.

Palestinians believe that Joseph’s Tomb is the funerary monument to Sheikh Yousif Dweikat, a local religious and social figure.