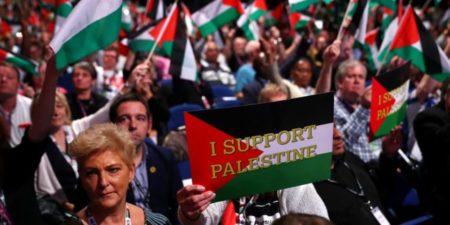 Delegates at the 2019 Labour Party Conference have, almost unanimously, passed a motion reaffirming Labour’s support for Palestinian human rights, including their “collective rights to self-determination and to return to their homes.”

Last year, for the first time in history,the  Labour Conference debated a motion on Palestine which was passed resoundingly amidst a sea of Palestinian flags, in a mass demonstration of public solidarity with the Palestinian people.

The passing of the motion, today, comes the day after a packed out fringe meeting hosted by Palestine Solidarity Campaign, featuring speeches from Diane Abbott MP, Lisa Nandy MP, speakers from Unite and UNISON unions, as well as a live video link with BDS movement co-founder Omar Barghouti, who was prevented from attending in person due to an unexplained, abnormal delay, by the British government, in processing his visa.

PNN further reports that the motion also comes two weeks after the Trade Union Congress conference passed a similar motion that reaffirmed their commitment to working closely with Palestine Solidarity Campaigns, and to take on UK companies complicit in Israel’s violations of international law and human rights.

Ben Jamal, Director of Palestine Solidarity Campaign, said: “The Palestinian people have called for global solidarity, in response to the assault by Israel, supported by Trump, on their collective rights. Today, the Labour Party has responded to that call by passing a motion that commits the party to end the UK’s financial and military complicity with Israel’s oppression. Labour party members have said, in one voice to the Palestinian people – we stand with you in your fight for justice. What is required, now, is for this crucial motion, passed overwhelmingly by members, to be translated into official party policy, as we move towards the next general election.”