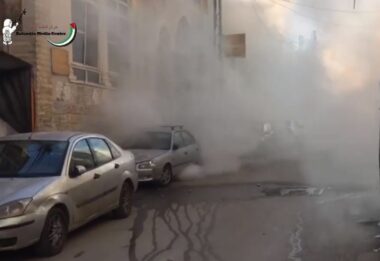 Local sources said many army jeeps invaded the refugee camp before the soldiers stormed and searched many homes and buildings.

They added that the soldiers occupied the rooftops of many buildings, including the ones used by the Fateh Movement and the Popular Committee in Qalandia.

Many youngsters hurled stones at the invading Israeli military vehicles, while the soldiers fired a few live rounds, rubber-coated steel bullets, and dozens of gas bombs at random.

Two young Palestinian men were shot with rubber-coated steel bullets, including one who was shot in the eye, and dozens of residents suffered the effects of teargas inhalation.