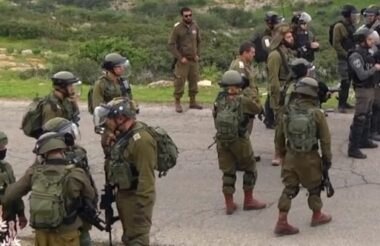 Israeli soldiers invaded, Tuesday, the al-Farisiyya Palestinian Bedouin community in the Northern Plains of the occupied West Bank, and demolished a residential structure.

He added that this is the second time in less than a month that the soldiers have demolished the residential structure, under the allegation of being installed without a permit.

Al-Farisiyya is one of the dozens of Bedouin communities in the Northern Plains and other parts of the occupied West Bank that are frequently targeted by the army, especially amidst the ongoing Israeli attempts to annex the Jordan Valley, and to remove Palestinian communities for the benefit of the illegal construction and expansion of its colonies.

Earlier this month, the soldiers invaded Khirbat al-Hamsa village in the Jordan Valley, and demolished it, rendering eleven families of 73 persons, including 41 children, without a shelter.

In a statement after the demolition of the village, the United Nations Office for the Coordination of Humanitarian Affairs in the occupied Palestinian Territory (OCHA-OPT) said:

“So far in 2020, 689 structures have been demolished across the West Bank, including East Jerusalem, more than in any full year since 2016: rendering 869 Palestinians homeless. The lack of Israeli-issued building permits is typically cited as a reason, even though, due to the restrictive and discriminatory planning regime, Palestinians can almost never obtain such permits. Demolitions are a key means of creating an environment designed to coerce Palestinians to leave their homes.”