Army Injures Many Palestinians in Qalqilia And Nablus 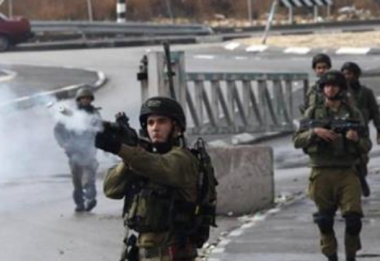 Israeli soldiers injured, Thursday, many Palestinians in Qalqilia city, and in Beit Forik town, east of Nablus, in the northern part of the occupied West Bank.

Medical sources in Qalqilia said the soldiers shot one Palestinian with a rubber-coated steel bullet, and caused seventeen others to suffer the effects of teargas inhalation, in the Naqqar neighborhood, in the western part of the city.

The Palestinians were injured after the soldiers invaded the city and assaulted dozens of protesters.

In addition, the soldiers invaded Beit Forik town, east of Nablus, and opened fire at Palestinian protesters, wounding at least three with rubber-coated steel bullets, and causing dozens to suffer the effects of teargas inhalation.