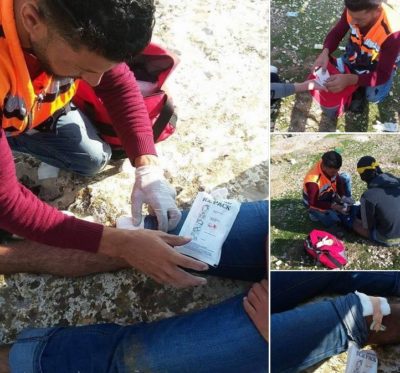 The Israeli attacks took place in Dar Salah village and Teqoua’ town, during activities marking the 14th anniversary of the death of President Yasser Arafat.

The Palestinian Medical Relief has reported that the soldiers shot eight Palestinians with rubber-coated steel bullets, and gas many to suffer the effects of teargas inhalation.

He added that many students suffered the effects of teargas inhalation, and the school had to shut down for the day to prevent any further military escalation.

It is worth mentioning that the soldiers also detained the school principal, and several teachers.

Many Palestinians then protested the attack and hurled stones at the invading soldiers, who fired rubber-coated steel bullets, gas bombs and concussion grenades.

The soldiers also closed the western and northern entrances of the town, and prevented the Palestinians from entering or leaving it.

In addition, the soldiers also attacked a school in Dar Salah village, east of Bethlehem, during a similar activity commemorating Arafat’s death.

A similar attack targeted a school in Hebron, in the southern part of the West Bank, causing many students, and one teacher, to suffer the effects of teargas inhalation.