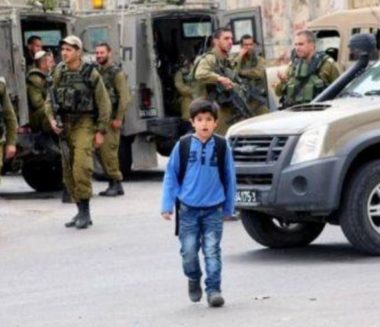 Israeli soldiers attacked, Sunday, a Palestinian school in Hebron, in the southern part of the occupied West Bank, causing many students, and one teacher, to suffer the effects of teargas inhalation.

Ali Erfa’eyya, the principal of Tareq Bin Ziad Secondary School for Boys, said the soldiers invaded the school in the morning, and fired many gas bombs and concussion grenades.

He added that at least ten students, and one teacher, suffer the effects of teargas inhalation, while some of the students fainted due to the gas bombs.

The school is located in the southern area of Hebron city, and is subject to constant violations, especially due to the permanent military deployment in that area.

In related news, the soldiers invaded and ransacked several homes in Yatta and as-Sammoa’ towns, south of Hebron, and installed many roadblocks before stopping and interrogating many Palestinians.