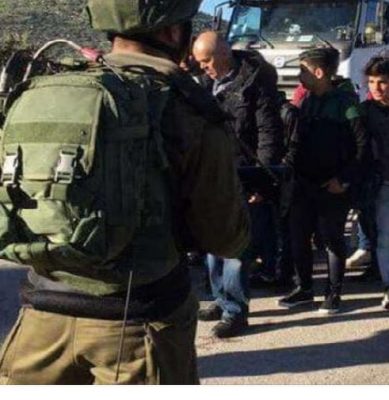 Israeli soldiers fired, on Tuesday morning, several gas bombs at schoolchildren, heading to their schools, in the al-Lubban ash-Sharqiya village, south of the northern West Bank city of Nablus.

The children were walking to their schools by the main Nablus-Ramallah road, before the soldiers started firing gas bombs, concussion grenades and rubber-coated steel bullets, and attempted to prevent them from reaching their educational facilities.

Medical sources said many students suffered the effects of teargas inhalation and received the needed treatment.

The soldiers also installed a military roadblock at the entrance of the village, and interrogated many Palestinians, especially schoolchildren.

Furthermore, the soldiers detained a young man from the village, and assaulted him before attempting to abduct him, but the locals managed to take him away.

On Tuesday at dawn, the soldiers abducted one Palestinian from Balata refugee camp, east of the northern West Bank city of Nablus, in addition to abducting a man, on Monday at night, at Za’tara military roadblock, south of the city. The army also took measurements of homes in Beit Ummar, near Hebron.