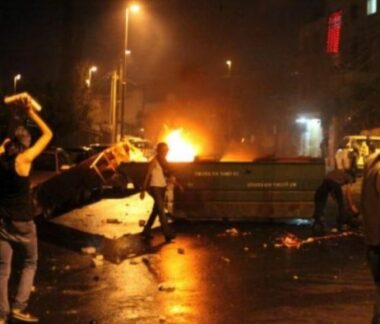 Israeli soldiers injured, on Saturday evening, more than a hundred Palestinians south of the northern West Bank city of Nablus, during protests against the Israeli violations in the Al-Aqsa Mosque and the rest of occupied Jerusalem.

The Palestinians marched close to the Huwwara Israeli military roadblock, south of Nablus before the soldiers started firing dozens of gas bombs, concussion grenades, and rubber-coated steel bullets at them.

The Palestinian Medical Relief has reported that the soldiers injured more than 100 Palestinians, many of them were shot with rubber-coated steel bullets and others suffered cuts and bruises, in addition to the severe effects of tear gas inhalation.

It added that the medics provided the needed treatment to the wounded Palestinians, and moved some of them to Rafidia Hospital, in Nablus.

The soldiers also closed the Huwwara roadblock and prevented the Palestinians from crossing.

In related news, the soldiers injured, on Saturday at night, dozens of Palestinians, during protests against the escalating Israeli violations in occupied Jerusalem, especially in and around the Al-Aqsa Mosque.