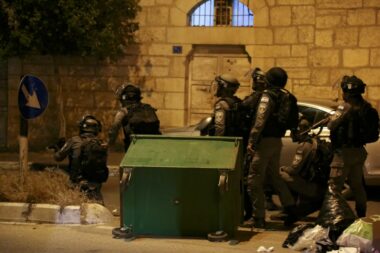 Israeli soldiers injured, on Saturday at night, dozens of Palestinians, during protests against the escalating Israeli violations in occupied Jerusalem, especially in and around the Al-Aqsa Mosque.

The nonviolent processions were organized by various political factions in Hebron, starting from the al-Hussein mosque in the city, before the Palestinians marched through Ein Sarah Street, Ibin Roshd junction, and then to the Bab az-Zawiya street in the center of the city.

The protesters marched while carrying Palestinian flags and chanting against the illegal Israeli occupation and its seriously escalating violations, in addition to calling for protecting Al-Aqsa and for national unity among all factions.

The Israeli army attacked the protesters with a barrage of gas bombs and concussion grenades, causing dozens of Palestinians to suffer the effects of tear gas inhalation, while many suffered cuts and bruises after the soldiers chased and assaulted them.

It is worth mentioning that the soldiers also attacked Palestinian protesters at the main entrance of the ar-Ram town, north of occupied Jerusalem, and fired a barrage of concussion grenades and gas bombs at them. Some of the Israeli bombs struck homes and cars.