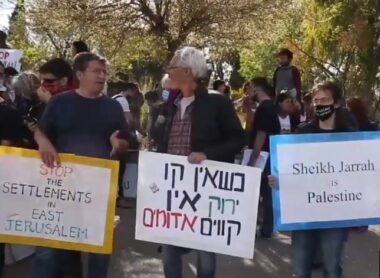 The Palestinian Red Crescent Society (PRCS) has confirmed that its medics provided treatment to nine Palestinians, including four who were shot with rubber-coated steel bullets.

It added that one of the injured Palestinians is a photojournalist working for the Al-Quds Newspaper, in Jerusalem.

The PRCS also said that the soldiers and the police attacked many Palestinians with batons, wounding five, who suffered various cuts and bruises.

The Palestinians were nonviolently marching to demand an end to the illegal takeover of their homes and buildings for the benefit of the illegal colonialist settlers and their outposts.

They called for aiding the Palestinian families in Sheikh Jarrah, as well as other parts of occupied Jerusalem, in their struggle to keep their homes and property amidst the extensive Israeli campaign to demolish them or illegally occupy them to establish new colonies.

Sheikh Jarrah is a Palestinian neighborhood of twenty-eight homes and residential buildings and is inhabited by more than 500 Palestinians threatened with displacement and expulsion.

Israel’s colonies in the occupied West Bank, including those in and around occupied Jerusalem, are illegal under International Law, the Fourth Geneva Convention, in addition to various United Nations and Security Council resolutions.
Amnesty International:

STATUS OF SETTLEMENTS UNDER INTERNATIONAL LAW

The International Court of Justice (ICJ) affirmed that the rules of the Geneva Conventions constitute “intransgressible principles of international customary law”. Only a limited number of international norms acquire this status, which is a reflection of the seriousness and importance with which the international community views them. Breaches of these norms give rise to certain obligations on all other states, or “third states”, which are explained below.