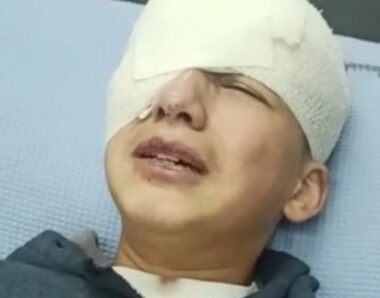 Palestinian medical sources have confirmed that a child lost his right eye, Friday, after an Israeli soldier shot him with a rubber-coated steel bullet, in Bab az-Zawiya area, in the center of Hebron city, in the southern part of the occupied West Bank.

The sources said the child, Ezzeddin Nidal al-Batsh, 13, was directly shot with the rubber-coated steel bullet in the right eye before medics rushed him to Hebron Governmental Hospital.

The child’s father, Nidal, said that Ezzeddin was in a shop in Bab az-Zawiya when he was shot in the eye, after the soldiers, stationed at the permanent military roadblock at the entrance of the Shuhada Street, fired many rubber-coated steel bullets, gas bombs and concussion grenades at Palestinian protesters.

Nidal added that the soldiers fired their bullets, gas bombs, and concussion grenades at random, many of them hitting stores and homes.

Many Palestinians also suffered the effects of teargas inhalation, in addition to others who sustained cuts and bruises.