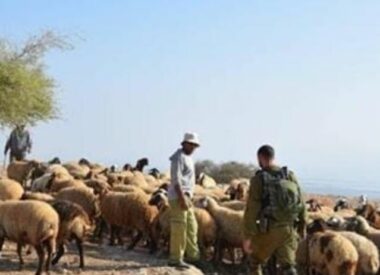 Nabil Obeyyat, a local activist, said the soldiers detained the two shepherds, identified as Mustafa Ibrahim Obeyyat, 45, and Mos’ab Saleh Obeyyat, 20, after they took their sheep to graze near the village.

Obeyyat added that the soldiers claimed the sheep, and the two shepherds, entered a “closed military zone.”

The two Palestinians were taken to Gush Etzion military base and security center, south of Bethlehem, and were detained for several hours before being released.

It is worth mentioning that Palestinian shepherds are subject to frequent Israeli military violations, in addition to the repeated assault by the illegal colonialist settlers.