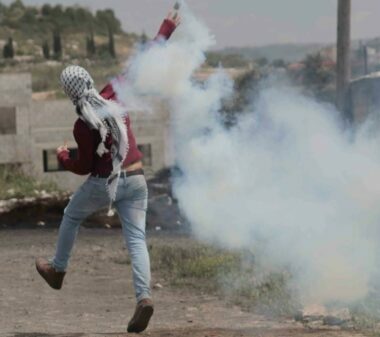 Morad Eshteiwy, the media coordinator of the Popular Committee against the Annexation Wall and Colonies in Kufur Qaddoum, said dozens of Palestinians, and international peace activist, marched from the center of the village, also marking the 73rd anniversary of Deir Yassin Massacre which was committed by Ergun and Stern Zionist terrorist organizations in the village on April 9th, 1948, killing 250-360 Palestinians in cold blood, after the two groups invaded the village of 750 inhabitants.

Eshteiwi stated that the soldiers invaded Kufur Qaddoum and resorted to the excessive use of force against the protesters, and fired a barrage of sponge-tipped bullets, rubber-coated steel bullets, gas bombs, and concussion grenades at them.

Dozens of residents suffered the effects of teargas inhalation, and others sustained cuts and bruises, before receiving treatment by local medics.

Kufur Qaddoum witnesses frequent Israeli invasions, assaults, and abductions as it continues to hold its weekly nonviolent processions against the illegal Annexation Wall and colonies, and against the closure of the main road, which was blockaded by the military sixteen years ago, to enable easy access for colonialist settlers driving to and from the Kedumim colony, built on private Palestinian lands.