Army Injures One Palestinian, Kidnaps Another, In Jerusalem 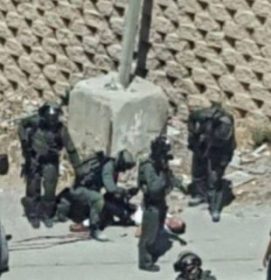 The Israeli police said the man was mildly injured, and that the soldiers shot him after they allegedly noticed that he “carried a knife.”

The Palestinian Red Crescent Society in Jerusalem said the soldiers are still preventing its medics from approaching the wounded man, and that the soldiers closed the roadblock on both directions.

Clashes erupted after the soldiers invaded the refugee camp, and fired a few live rounds, rubber-coated steel bullets and gas bombs, at local youngsters who hurled stones on them.

The Israeli Police said members of its “Border Guard” units, were attempting to arrest a young Palestinian man from Shu’fat when another Palestinian attempted to obstruct them, and that the soldiers noticed a third young man, reportedly “carrying a knife and approaching them rapidly,” before they shot him.

Spokesperson of Fateh movement in Jerusalem Tha’er Fasfous, said the wounded young man was trying to remove a knife from the hand of another young man, known to be a drug addict.