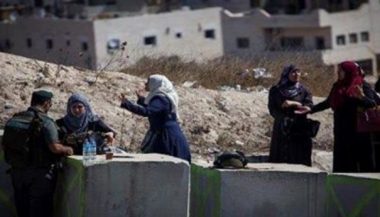 The Israeli army completely surrounded and isolated the town of al-‘Isawiyya, in occupied East Jerusalem, earlier on Thursday, after the soldiers parked their vehicles on all of its entrances, preventing the Palestinians from entering or leaving it.

The soldiers stopped and searched dozens of Palestinian cars and interrogated many residents while inspecting their ID cards.

Local sources said the closure and roadblocks caused traffic jams, especially since the soldiers kept the cars line up for extended periods, forcing the residents to wait, before preventing them from entering or leaving the town.

Israeli police officers also ticketed dozens of Palestinians, and imposed very high fines on them, as an act of collective punishment following the late-night clashes between the soldiers and local youths, after the army invaded their town, and searched many homes.

In related news, the soldiers shot, and mildly injured, one Palestinian at a military roadblock near the Shu’fat refugee camp, northeast of Jerusalem, and kidnapped another Palestinian.

The incident took place after the soldiers invaded the refugee camp, and claimed the wounded Palestinian carried a knife.