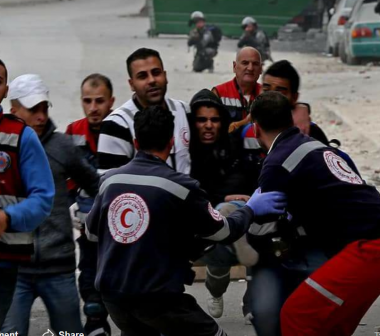 Israeli soldiers invaded, Friday, the al-Lubban ash-Sharqiya village, south of the northern West Bank city of Nablus, and opened fire on dozens of Palestinian protesters, in addition to firing gas bombs at homes, wounding seven, and causing others to suffer the effects of teargas inhalation. The soldiers also abducted one child in Nablus city.

The soldiers also fired many rubber-coated steel bullets, wounding seven, including four who were suffered moderate injuries, and were rushed to Salfit governmental hospital.

One Palestinian suffered cuts and bruises, after falling when many soldiers chased him, but were unable to abduct him.

In addition, the head of al-Lubban ash-Sharqiya Village Council, Samer ‘Oweiss, said the army also closed the main entrance of the village with concrete blocks, and sand hills.

In related news, the soldiers abducted a Palestinian child, identified as Mohammad Abu Kamla, from Nablus city, while riding his bicycle in the al-Quds Street, near the southern entrance of the city.

The child was taken prisoner when the soldiers assaulted Palestinian protesters, and fired many gas bombs at them.

Palestinian medics tried to secure the release of the child, who was just passing through the area, but the soldiers attacked them, and took him to Huwwara military base.

Also on Friday, the soldiers killed two Palestinians, and injured at least 123 others, including three who suffered life-threatening wounds, and caused dozens to suffer the effects of teargas inhalation, after the army, stationed across the border fence, resorted to the excessive use of force against Palestinian protesters, in several parts of the Gaza Strip.