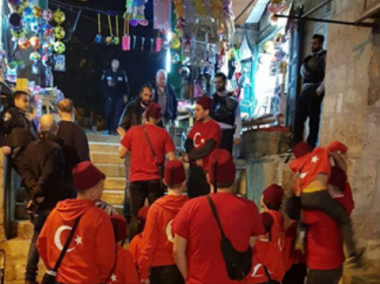 Updated: On Saturday evening, December 23, an Israeli court in occupied Jerusalem decided to release the four Turkish citizens, after ordering them to pay 1000 shekels each, and issued orders preventing them from entering Al-Aqsa Mosque for twenty days.

Israeli soldiers abducted, on Friday evening, four Turkish citizens after assaulting them near Bab al-Qattanin, leading to the Al-Aqsa Mosque, in occupied Jerusalem.

Eyewitnesses said the four were among a group of Turkish citizens, who were heading to the Al-Aqsa Mosque, while wearing traditional uniforms, which also included the Turkish flag, but the soldiers stopped and searched them, and demanded them to remove their uniforms.

The Turkish group left to their hotel, removed their uniforms and tried to enter again wearing ordinary clothes, but the soldiers started pushing them around, and assaulted them.

The army then abducted one of the Turkish citizens in font of Bab al-Qattanin (Gate of the Cotton Merchants), and three threes near Bab al-Silsila (Chain Gate).