Palestinian Dies From Wounds Suffered A Week Earlier In Gaza 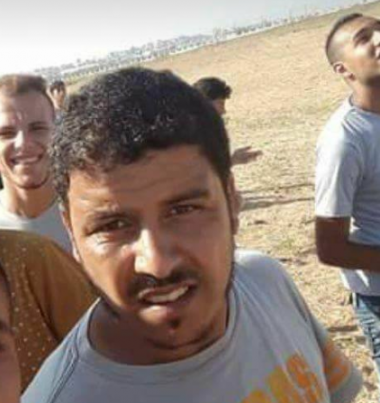 The Palestinian Health Ministry has reported that a Palestinian man died, Saturday, from wounds he suffered a week earlier, east of Jabalia, in the northern part of the Gaza Strip.

The Ministry said the young man, Sharif al-‘Abed Abu Shallash, 28, suffered a serious injury after the soldiers shot him with live fire, and remained in a critical condition until he succumbed to his wounds.

He was injured on the same day when the soldiers killed four Palestinians, and wounded at least 367 others, in the Gaza Strip, and the West Bank,

His death came less than a day after the soldiers killed, Friday, two Palestinians, identified as Mohammad Nabil Moheisin, 29, from Sheja’eyya neighborhood, east of the city, and Zakariya al-Kafarna, 24, from Beit Hanoun, in northern Gaza.

The Health Ministry said Sharif’s death, brings the number of Palestinians, who were killed by Israeli army fire since the U.S.

President made his illegal recognition of occupied Jerusalem as a unified capital of Israel, on October 6th, to fourteen Palestinians, in addition to at least 3000 Palestinians who were injured by army fire.