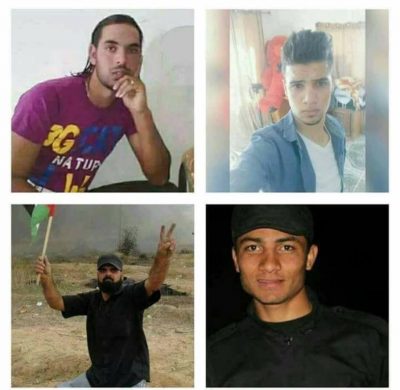 The Palestinian Health Ministry has confirmed that Israeli soldiers have killed, Friday, December 15, 2017, four young Palestinian men, and injured at least 367, after the army resorted to the excessive use for force against protesters in various parts of the occupied West Bank, including the occupied capital city of Jerusalem, and the Gaza Strip.

The Ministry said that the soldiers increased their use of live rounds against the unarmed protesters, which they have been using to some extent all week, in addition to firing rubber-coated steel bullets, gas bombs and concussion grenades to counter ongoing protests.

In addition, the Ministry said that Israeli soldiers have killed eleven Palestinians, and injured more than 3000 others, in the past eight days, since U.S President Donald Trump made his illegal recognition of occupied Jerusalem as a unified capital of Israeli and issued an order to move the U.S. Consulate from Tel Aviv to the occupied City.

It is worth mentioning that Trump also refused to sign documents extending the permit for the Palestinian Representative Office in Washington D.C.

The Ministry of Health identified the Palestinians who were killed Friday as:

It added that Palestinian hospitals have provided treatment to at least 367 persons in the West Bank and the Gaza Strip.

103 Palestinians were shot in the West Bank; two of them suffered life-threatening wounds and remain in critical conditions.

264 Palestinians were injured in the Gaza Strip; five of them suffered life-threatening wounds, 1000, who suffered the effects of teargas inhalation, in addition to cuts and bruises.

It is worth mentioning that the Palestinian Red Crescent has confirmed that its medics have provided treatment to 888 Palestinians in the West Bank and the Gaza Strip, without the need to move any of them to hospitals or medical centers for further treatment.

Thousands of Palestinian marched in several parts of the besieged Gaza Strip, especially in Palestinian lands close to the border fence, before Israeli soldiers started firing dozens of live rounds at them, in addition to rubber-coated steel bullets, gas bombs and concussion grenades.

One of the slain Palestinians was identified as Ibrahim Abu Thuraya, 29, who was shot by an Israeli soldier with a live round in t

he head, near the eastern 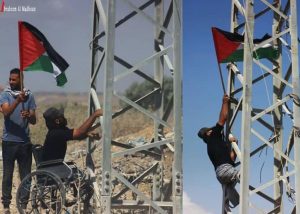 His brother, Samir, said that Ibrahim was an amputee, who lost both of his legs in 2008, when an Israeli army helicopter fired a missile at him after he removed the Israeli flag and replaced it with the Palestinian flag, on the border fence. Just before he was killed on Friday, Ibrahim had climbed a tower and placed the Palestinian flag – climbing with just his arms, since both his legs 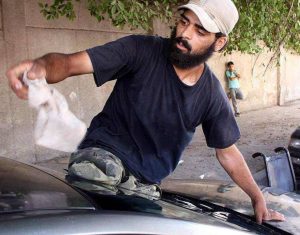 have been gone since 2008. Shortly after he climbed back down from the tower to his wheelchair, he was shot and killed.

The second slain Palestinian has been identified as Yasser Sokkar, 23, who was shot with live Israeli army fire, east of the Sheja’eyya neighborhood, in the western part of Gaza city.

The Palestinian Health Ministry has confirmed that the soldiers also killed Bassel Ibrahim, 29, after shooting him with a live round in the chest, during protests in his town Anata, north of occupied Jerusalem.

He suffered a serious wound, and died at the Palestine Medical Complex in Ramallah, while doctors and surgeons were trying to save his life.

Another Palestinian, Mohammad Amin ‘Aqel, 19, from Beit Ula town, northwest of Hebron, died from serious wounds he suffered at the northern entrance of al-Biereh, in central West Bank.

The Palestinian approached Israeli soldiers near the northern entrance of al-Biereh, in central West Bank, and attempted to stab a soldier, mildly wounding him.

The soldiers shot the Palestinian, inflicting serious wounds, before he was rushed by Palestinian Red Crescent medics to a hospital in Ramallah.

A Video from the scene shows the soldiers shooting the Palestinian from a short distance with one live round, as he was trying to approach them, and then fired at least two more rounds at him after he was already injured and subdued.

Furthermore, the soldiers used excessive forces against the Palestinian, Israeli and international protesters who held the weekly nonviolent procession in Bil’in village, west of Ramallah.

The Health Ministry in Ramallah said 14 Palestinians were moved to the Palestine Medical Complex, including one who suffered a serious injury, after the soldiers shot him with a rubber-coated steel bullet in his head. He is currently in a moderate-but-stable condition at the Intensive Care Unit. The Palestinians were injured after the soldiers attacked protesters in several parts of the governorate.

In Nablus governorate, in the northern West Bank, the soldiers abducted three Palestinians, and caused dozens to suffer the effects of teargas inhalation, near Huwwara roadblock, south of Nablus city, in addition to Beita nearby town.

The soldiers also invaded the al-Lubban ash-Sharqiya village, south of Nablus, and Sebastia town, northwest of the city, and attacked dozens of protesters, causing scores to suffer the effects of teargas inhalation.

In Jenin, in the northern West Bank, the soldiers injured two Palestinians, and abducted another one, near the al-Jalama roadblock, northeast of the city, after the army assaulted protesters marching there.

Medical sources said one of the wounded Palestinians was injured after the soldiers rammed him with their jeep. He has been identified as Mohammad Nasr Sbeih, 21. Two Palestinians were shot with live fire, and all three were taken to Khalil Suleiman governmental hospital.

In Hebron, in the southern part of the West Bank, the soldiers assaulted hundreds of protesters in the city itself, and in nearby Sa’ir and Yatta towns, south of the city, in addition to the al-Fawwar and al-Arroub refugee camp, and Beit Ummar town, north of Hebron.

The soldiers also shot a young man with a live round in one of his legs, in the al-Arroub refugee camp, north of Hebron.

Furthermore, the soldiers abducted four Palestinians, including a journalist identified as Bilal Tawil, in Bab az-Zawiya area, in the center of Hebron city, and Mohannad Jaradat, in Sa’ir town.

Many Palestinians suffered the effects of teargas inhalation in many villages, towns and refugee camps, in the governorate.

In Qalqilia Governorate, in northern West Bank, the soldiers attacked protesters across the governorate, especially in Qalqilia city, in addition to the towns of Kufur Qaddoum, Azzoun and Jayyous.

The soldiers also attacked protesters in the northern West Bank city of Tulkarem, and shot one Palestinian with a gas bomb in his head, in addition to causing dozens to suffer the effects of teargas inhalation.

In the occupied capital, Jerusalem, the soldiers shot at least one Palestinian with a live round, and caused dozens to suffer the effects of teargas inhalation, at the entrance of Qalandia refugee camp.

Thousands of Israeli soldiers and police officers were deployed in Jerusalem from the pre-dawn hours and throughout the day on Friday. They installed iron bars and roadblocks in the Old City, Bab al-Amoud (Damascus Gate), Sultan Suleiman, Salahuddin Street, al-Misrara, Gate of the Tribes, and many other areas.

The soldiers also occupied many rooftops, and the walls of the Old City, and closed all roads and alleys leading to the Al-Aqsa Mosque.

The Palestinian Health Minister Jawad Awwad issued a statement strongly condemning the serious and deadly Israeli escalation, and the excessive use of force against nonviolent protesters, and added that the killing of four Palestinians, and the injuring of hundreds, including some who suffered life-threatening wounds, is another proof of Israel’s illegal brutality, and its blatant challenging of International Law and all related human rights agreements and United Nations resolutions.

He added that the illegal declaration of U.S. President Donald Trump, recognizing occupied Jerusalem as the united capital of Israel, and his intentions to move the US Embassy to the city, have encouraged Israel to become even more brutal and deadly in their assaults on the Palestinian people, having been given what they see as a ‘Green Light’ from Trump.