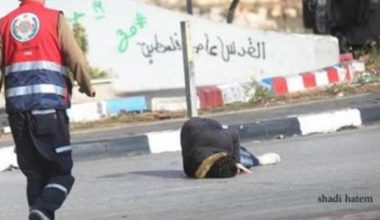 Dozens of thousands of Palestinians marched, Friday, in several parts of the occupied West Bank, including Jerusalem, and the Gaza Strip, and were met by soldiers who resorted to the excessive use of force, leading to dozens of injuries, among them one who was seriously wounded, reportedly after “attempted to stab a soldier.”

The Palestinian, who suffered a serious injury, was not among the protesters, while initial reports indicate that he approached Israeli soldiers near the northern entrance of al-Biereh, in central West Bank, and attempted to stab a soldier.

The soldiers shot the Palestinian, inflicting serious wounds, before he was rushed by Palestinian Red Crescent medics to a hospital in Ramallah.

A Video from the scene shows the soldiers shooting the Palestinian from short distance with one live round, as he was trying to approach them, and then fired at least two more rounds at him after he was already injured and subdued.

Update: The Palestinian Health Ministry has confirmed that the Palestinian, identified as Mohammad Amin ‘Aqel, 19, from Beit Ula town, northwest of Hebron, gas died from his serious wounds, at the Palestine Medical Complex in Ramallah.

Furthermore, the army attacked Palestinian protesters in Budrus village, west of Ramallah, and the soldiers fired many live rounds.

In Bil’in village, west of Ramallah, the soldiers assaulted the weekly nonviolent procession, and fired many gas bombs, concussion grenades and rubber-coated steel bullets, causing scores to suffer the effects of teargas inhalation.

In occupied Jerusalem, the soldiers fired live rounds, rubber-coated steel bullets and gas bombs at hundreds of Palestinians who matched in al-Aqsa Mosque, and the Old City, in addition to several nearby areas, in addition to Qalandia Terminal.

In Bethlehem, the soldiers used excessive force against protesters, in the northern part of the city, and fired many live rounds, rubber-coated steel bullets and gas bombs.

Medical sources said the soldiers shot eight Palestinians with rubber-coated steel bullets; four of them were moved to hospitals, while 13 others suffered the effects of teargas inhalation.

In Hebron, the soldiers attacked protesters in Bab az-Zawiya area, in the center of the city, in addition to al-‘Arroub refugee camp, Shiokh village, Tarqoumia town, Beit Ummar town, and several other areas.

Many Palestinians were injured, including one who was shot with live fire in the al-‘Arroub refugee camp.

The soldiers also assaulted a cameraman, identified as Eyad al-Hashlamoun, of the Palestine Satellite TV, in Bab az-Zawiya area, and forced many journalists away after preventing them from documenting the unfolding events.

In Nablus, in northern West Bank, thousands of Palestinians marched in the center of the city, and hundreds marched towards Huwwara military roadblock, south of the city, before the soldiers started firing at them, leading to clashes.

The soldiers also attacked dozens of protesters in Burin village, south of Nablus, especially in the southern area of the city, including Huwwara, Beita Junction, Beit Forik town and Salem village.

In Qalqilia, in northern West Bank, the soldiers attacked protesters in the city, in addition to Kufur Qaddoum, Azzoun and Jayyous.

In Tulkarem, also in northern West Bank, the soldiers attacked protesters and injured one activist, identified as Khairi Hannoun, with a gas bomb fired at his head, west of the city.

In addition, thousands marched in the northern West Bank governorate of Jenin, and chanted against Donald Trump, and his illegal policies, in addition to chanting against the ongoing Israeli military occupation and escalating violations.

In the Gaza Strip, the soldiers fired live rounds at protesters near Beit Hanoun (Erez) terminal, in northern Gaza, and shot a young man in his leg, before he was rushed to the Indonesian Hospital.

The soldiers also shot a young man in his back, near the Eastern Graveyard, before he was rushed to Abu Yousef an-Najjar hospital, in Khan Younis, in southern Gaza.

Medical sources in the Gaza Strip have confirmed that the soldiers shot two Palestinians with live fire near Erez Terminal, and two others east of Rafah, in southern Gaza, before they were all rushed to hospitals.

They added that the army injured many Palestinians east of the Sheja’eyya neighborhood, southeast of Gaza city, and three others east of Jabalia, in northern Gaza.

Another Palestinian suffered moderate wounds east of the al-Boreij refugee camp, in central Gaza, and was rushed to the Al-Aqsa Hospital.