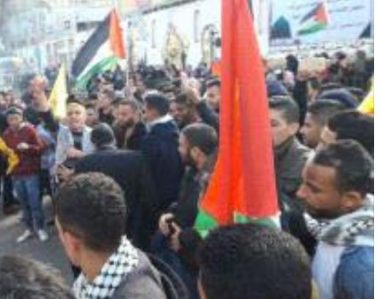 Israeli soldiers attacked, on Friday afternoon, thousands of Palestinian protesters, who marched in several parts of the occupied West Bank, in condemnation of the illegal U.S. recognition of occupied Jerusalem as the unified capital of Israel.

The soldiers resorted to the excessive use of force against the Palestinians, including the use of live fire, in addition to gas bombs, concussion grenades and rubber-coated steel bullets.

Marches and protests took place in all parts of the occupied West Bank, including Jerusalem’s Old City, and near Qalandia refugee camp, north of Jerusalem, Bethlehem, Nablus, Jenin, Tulkarem, Salfit, Bethlehem and Hebron.

Protests were also held in various parts of the besieged Gaza strip, including in areas close to the border fence.

Many Palestinians Injured In Bethlehem