Many Palestinians Injured In Bethlehem 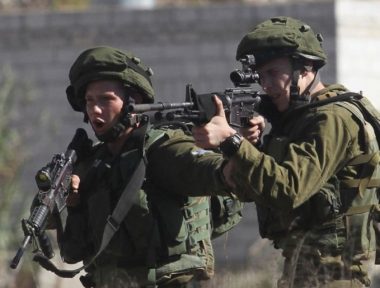 Israeli soldiers attacked, Friday, a nonviolent Palestinian procession near the al-Azza refugee camp, north of the West Bank city of Bethlehem, causing many to suffer the effects of teargas inhalation in addition to cuts and bruises.

The Palestinians marched from the refugee camp, and headed towards the northern entrance of the city, while chanting against the ongoing Israeli occupation, and escalation, and the illegal recognition of the American president of occupied Jerusalem as the capital of Israel, in direct violation of International Law.

The protesters called for a strong and unified national front to counter the ongoing violations and oppression, and chanted for the liberation of Palestine, especially its occupied capital, Jerusalem.

The soldiers resorted to the excessive use of force against the protesters, while several youngsters hurled stones at them.

In related news, the soldiers invaded Atouf village, southeast of Tubas, in northeastern West Bank, and attacked a nonviolent procession, wounding three Palestinians, and abducted three others, including a reporter.