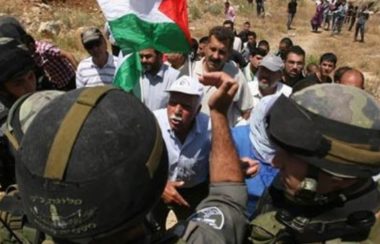 Israeli soldiers attacked, Friday, the weekly nonviolent procession against the illegal Annexation Wall and Colonies, in Bil’in village, west of the central West Bank city of Ramallah, causing many injuries.

The procession was attended by dozens of Palestinians, accompanied by international and Israeli peace activists.

They marched carrying Palestinian flags, and chanting for national unity, the release of all detainees, the return of the refugees and for liberation and independence.

The soldiers invaded the area, and resorted to the excessive use of force against the nonviolent protesters.