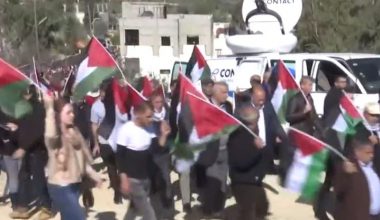 Israeli soldiers injured, Saturday, several Palestinians in Nabi Saleh village, north of Ramallah, after the army attacked dozens of nonviolent protesters in the village, which was also placed under a strict military siege.

Tamimi added that the Palestinians marched in their village, heading towards the nearby military base, installed on their lands, while chanting against the Israeli escalation, and constant targeting of the villagers, and their lands.

On Saturday at noon, the army imposed a strict siege on Nabi Saleh, and declared it a “closed military zone,” after installing roadblocks at its entrances, and prevented the Palestinians from entering or leaving it.

It is worth mentioning that the villagers were also preparing to hold a popular festival, dubbed as “Jerusalem, the eternal capital of Palestine.”

On Friday, the soldiers attacked the weekly nonviolent procession in Nabi Saleh, and caused dozens of to suffer the effects of teargas inhalation.

In related news, the soldiers invaded Rommana village, west of the northern West Bank city of Jenin, and installed a military roadblock.

The soldiers fired rubber-coated steel bullets and gas bombs at many Palestinians, who protested the invasion, in addition to targeting nearby homes with gas bombs and concussion grenades.