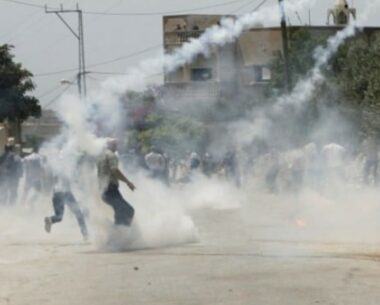 Israeli soldiers shot, Saturday, a young Palestinian man with live fire, and caused many to suffer the effects of teargas inhalation, in Ni’lin village, west of the central West Bank city of Ramallah.

Media sources said the soldiers attacked nonviolent protesters, who were marching against the illegal annexation of Palestinian lands in the Jabal Al-Alam area, where Israeli colonists recently installed an outpost.

They added that the soldiers fired many live rounds at the protesters, wounding a young man with three bullets in the leg.

The soldiers also fired many gas bombs and concussion grenades at the protesters, causing many to suffer the effects of tear gas inhalation.

In addition, the soldiers closed the iron gate at the main entrance of the village and prevented the Palestinians from entering or leaving it.